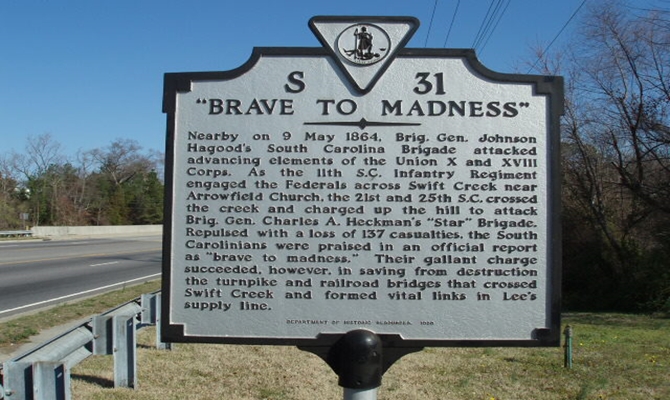 Nearby on 9 May 1864, Brig. Gen. Johnson Hagood’s South Carolina Brigade attacked advancing elements of the Union X and XVIII Corps. As the 11th S.C. Infantry Regiment engaged the Federals across Swift Creek near Arrowfield Church, the 21st and 25th S.C. crossed the creek and charged up the hill to attack Brig. Gen. Charles A. Heckman’s “Star” Brigade. Repulsed with a loss of 137 casualties, the South Carolinians were praised in an official report as “brave to madness.” Their gallant charge succeeded, however, in saving from destruction the turnpike and railroad bridges that crossed Swift Creek and formed vital links in Lee’s supply line.