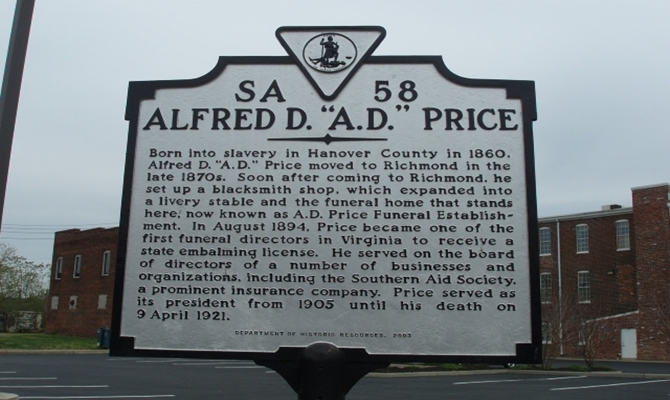 [Editor’s Note: The statement that A. D. Price was “born into slavery” is unsupported by reliable documentation. Price family oral history states that he was not enslaved. In addition, records indicate that Price grew up in Hanover County, but his marriage certificate states that he was born in Nelson County.] Born into slavery in Hanover County in 1860, Alfred D. “A. D.” Price moved to Richmond in the late 1870s. Soon after coming to Richmond, he set up a blacksmith shop, which expanded into a livery stable and the funeral home that stands here, now known as A. D. Price Funeral Establishment. In August 1894, Price became one of the first funeral directors in Virginia to receive a state embalming license. He served on the board of directors of a number of businesses and organizations, including the Southern Aid Society, a prominent insurance company. Price served as its president from 1905 until his death on 9 April 1921.